We have officially started home-schooling.  We are semi structured which means that we do some sit down schooling and the rest of the time we learn other ways. Elsa has a little desk area, which we lovingly named the Harry Potter Study (due to it being under our stairs).  She sometimes sits in here but mostly we use our living room table. 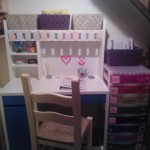 I had a quick look at the Year 4 curriculum online (which is where Elsa would be should she still be in school) and decided that I would not really stick to it at all, however, most days Elsa does Maths, English, Science and Geography plus topic work (which we can do when Anna is at home as I collate age stuff appropriate for her to do).

We have an set of organisational trays which Elsa has labelled herself.  I put the subjects I want her to do each day on the left hand side of the drawer and when she’s finished them, she moved the velcro subject indicators over to the right hand side of the drawers.  She doesn’t have to do all of the subjects each day. She has also chosen subjects she would like to learn such as more in depth Senses, the Romans, Space, Diwali, Pirates (the list is endless and to be honest I’m not sure how we are going to fit it all in).

There are some subjects which are at certain times of year (such as Diwali being in November) so we will be doing those around then.

The first thing we decided we would do was learn a bit about Queen Victoria and Queen Elizabeth II as this month coincided with our Queen becoming the longest reigning monarch in history.  Elsa decided what information she’d like to research and after a discussion we thought we’d try a lapbook.  She got going using books and the Royal website along with images found online.  We finished with writing a letter to the Queen congratulating her on this amazing achievement.  We received a lovely letter back from a Lady-in-Waiting which has taken pride of place in her study. 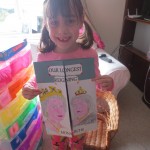 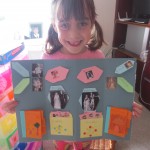 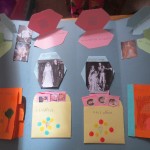 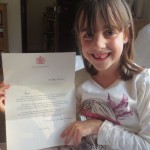 EDP 24 Article – Parents of eight-year-old girl fined for taking her on charity-funded holiday.
Ministry of Science