One of the topics Elsa showed an interest in learning about was Pirates.  I’d always thought this was in interesting, if somewhat gruesome topic, however with great age related resources from the library we were able to learn all sorts of information about them including some of the gorier stuff.  We decided again to create a lapbook for this topic. Lapbooks are a fun, colourful and easy way of collating and displaying lots of information.  We downloaded the Pirate lapbook from Homeschool Share and used some parts of it and created our own information mini books as well using the templates which can also be found at Homeschool Share.

First of all, both Elsa and Anna designed bandanas so they could look like a pirate. 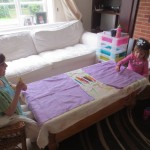 I downloaded a pirate game from Twinkl, which the girls both enjoyed playing A LOT. 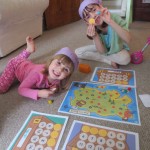 We researched various topics including crew, found information about 3 real pirates, food and drink, learned pirate speak and we made our own pirate flasg. 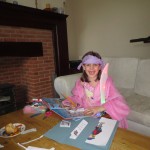 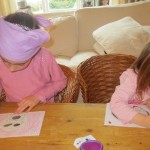 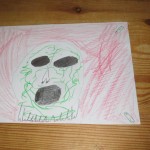 We also made a map, which was fun and came out really well. 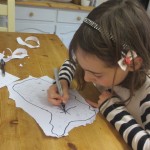 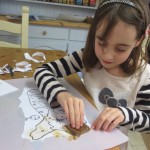 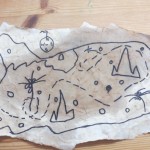 We ended this topic by watching the Aardman film The Pirates – In an Adventure with Scientists, which both girls thought was funny (and of course it was totally historically correct 😉 ) 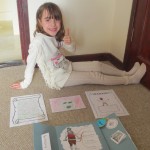 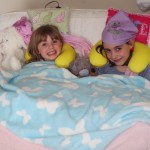 Crochet lesson with AM
Sewing a doorstop