Free choice Fridays are an idea I had.  Elsa does a lot I ask of her during the week.  She does choose her own topics though (this half term it’s the Romans)

Every day Elsa does a selection of the following, Maths, History, Science, English and Geography, which she enjoys and normally it’s only mornings.  In the afternoons we do things with Anna as she’s home from nursery, often related to what we’ve been doing in the mornings.

For instance, if Anna had been at nursery for the first morning after the Christmas holidays, Elsa and I would have learned about the Roman Empire and started our India geography topic, however she wasn’t so we did a Roman mosaic craft instead.

But as the title suggests, on Fridays Elsa is able to choose exactly what she wants to do.  Sometimes she chooses to continue with work we’ve been doing in the week because she’s finding it interesting.  Other weeks she chooses to do some drawings in her art book. which she can often spend hours doing that as it’s her favourite pastime. Until this week, that was all she’d chosen to do, but she’s becoming really detailed in her pictures and it’s really great for me to see her progressing and becoming more confident with her drawings. 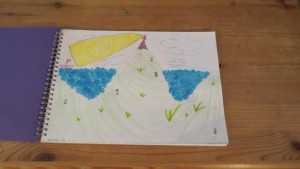 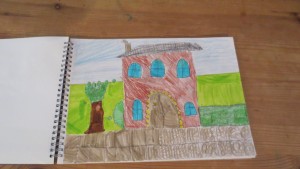 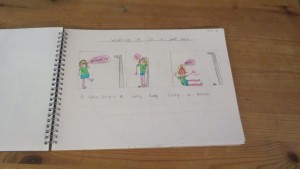 This is her favourite and most recent picture. 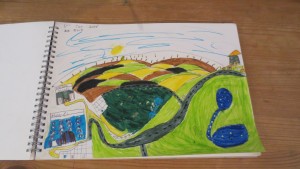 Obviously it’s not just drawing she can do, she can do whatever she would like to.

When we started home educating, to give her some ideas, I’d shown her a cross stitch I’d made when I was at primary school.  She said she’d like to do one, and last Friday she spent some of the morning designing hers and choosing the coloured cottons she’d like to use. 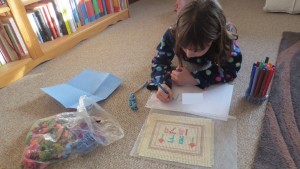