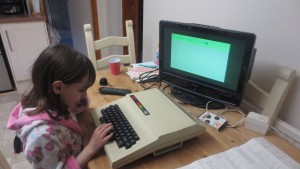 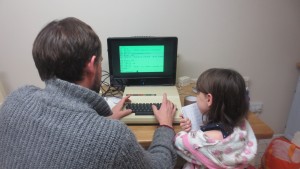 I saw this article today and it was enough to make my blood boil.

On the one hand, I can see that if you are going to choose to send your child to state school, you really ought to abide by their rules of engagement, but their rules are a one-side contract which have never been negotiated by the parents of attending children. We certainly never agreed to accept fines if we chose to take our children out of school for a week or two.

So, yesterday and today we decided to take Elsa out of school to help her with her home school jitters. She is naturally worried about being unable to make friends and so we took her to a local farm who were hosting a field trip for home schooled children in the area. At the farm she met a number of children of varying ages*. On the following day there was a beach trip to Mundesley with another family and their children.

The key motivator for Elsa on the Mundesley trip turned out to be a real winner: the night before I looked at a map of Mundesley, looked at the Wiki Page and hey presto about an hour later I had written some ‘Field Trip Questions’ suitable for an eight year old. There were questions about a (provided) map of the area, a list of buildings to find on the map and then take a photograph of to prove she could find them physically. There were also some research items which I had made sure she could find in her children’s dictionary and even a question that required some colouring-in.

In total there were ’20 points’ available for 100% correct completion of the questions and a scale of rewards based upon the number of points gained. The whole points for rewards thing was a real winner and very popular. I will at some point upload the sample quiz but I must say that for selected activities, providing points in this way (which can be saved and traded in for certain rewards) was a really good idea.

*Right there is an answer to the social concerns. She’s already having to deal with a broader range of children.

Today, I went on a field trip to Mundesley.

I learned that a slipway was for a boat to come down on to the beach.

I liked finding different shells and stones on the beach.

I did not like it when my little sister hurt herself on the outside gym when doing the swing to the side exercise.

I took some photographs and I would like to go again.

Before I have even had time to go into detail about why we have chosen to home-school, this article appears. Score 10 out of 10 for toeing what is presumably the government line and training our children to be loyal subjects.

Angela Konarzewski, head teacher of Fleetdown Primary School in Dartford, you should be ashamed of yourself. These are children. If you can’t educate them sufficiently by having them 6 hours a day, 5 days a week, and piling homework on top of that, then there is something wrong with the system and you are just helping to reinforce it.

We will be expanding on this topic in the future of course, but this particular concern is a natural one to parents who are thinking about educating outside of a school. Every member of the family we have mentioned it to raises this with us. We have already done our homework and as of this moment we are convinced that Elsa will get a far richer social life outside of school than inside it.

Yes, in school, Elsa will be able to mix inside the closed walls of a classroom with 30 other children of the same age and ability. She may or may not be able to interact with them, it just depends on what is being taught at the time. Is that really a good representation of the way our social life works? I suppose if you want to work in a factory that might be a good way to go. At work, do you sit in a room with 30 other people of exactly the same age, all from similar backgrounds, or do you mix with people of all ages and experiences and from all walks of life?

In however many years it has been since we (that is human beings, not our family) started walking the earth and grunting to each other, we have learned skills and experience from our elders, not our peers. If you want to be a well-adjusted adult that can hold a meaningful conversation with someone old or young, rich or poor, black or white, English or foreign, then the best place to do that is not in a classroom full of children who are the same age as you and come from a similar background within a 6 mile radius.

Only time will tell if Elsa will get a richer social life outside of school than in it, but if I were a betting man, my money is on the home school.

Wall Street Journal – Teaching kids at home can be terrifying, but it’s sure to grow as families demand more choice

I took a call from the head a Elsa’s school today after sending the de registration letter and I must say it was a really warm conversation. It was clear that the head was interested in our decision not just as an education professional, but on a human level too.

I outlined in more detail some of the reasons for our decision and we discussed them for a good 10 minutes. I explained that it is not the school or the teaching that is an issue, it’s more the education system as a whole. In no way did the head try and dissuade us from our decision and even told us that if they could provide us with any support, that they would do.

So, top marks for the head of our school, she is a credit to her profession.

Even though we had already decided to educate Elsa at home, actually sending her school a letter of de-registration was a really big deal. Just because we are not satisfied with the education system, it does not mean we are unhappy with the school which Elsa has been attending to this point.

Remember that teachers and head teachers are human beings trying to do a really rather important job with one hand tied around their back by the government. It can’t be easy for them being used as a political football, jumping through hoops and juggling the demands of pen pushers, parents and students.

Before we sent the letter, we (that is the grown ups) had a final chat to make sure we were 100% sure about what we were doing. I made sure that we focussed only on the disadvantages of educating at home to see if we would be swayed to change our decision. To be fair, it was hard to think of many disadvantages at all.

While discussing this I was mooching about on the TES Opinion Forum and I came across this post. It really was rather interesting, at some points funny, and actually helped reinforce my viewpoint that home education will simply be better for our our girls and our family.

Our position remained the same, we sent the letter tonight straight to the head, our home school journey has begun.