Elsa mentioned that she’d enjoyed learning about Romans when she was at school, but told me it was taught a bit quickly for her, so she wanted to go over it again.

I think this is a great opportunity to do a load of crafts (mosaics, make a seal etc) and to go on a couple of field trips (the castle to look at artefacts and a local Roman castle building)

As it turned out our first day ended up changing a little bit as Anna wasn’t at nursery as I’d expected, so we decided to design and create our own mosaics, which both girls enjoyed.

Firstly, we chatted about where Romans would have used mosaics, what they were often made from, and what common pictures were made.

Then both girls designed their own mosaic  on some squared paper. 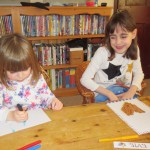 They used some cardboard as a base as it is sturdy and squares of different coloured card to make the designs. 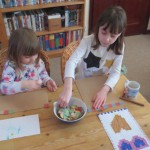 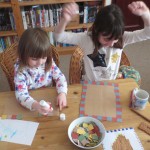 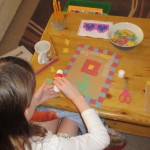 Finished mosaics.  As you can see the designs of the mosaics weren’t exactly as their templates (not the same at all 🙂 ), however, that’s the beauty of it, the ideas evolve as they are creating. 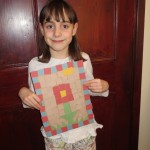 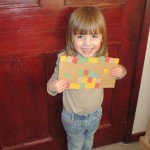